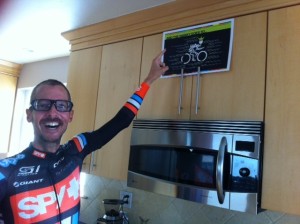 I’m pretty excited about the upcoming South Bay Cycling Awards, slated for October 17 at Strand Brewing Co.’s new facility, 2201 Dominguez Street in Torrance. In addition to having Steve Tilford as our guest speaker, and in addition to having four inductees into our newly built Hall of Fame (constructed entirely of zeroes and ones on land borrowed from Mark Zuckerberg), it’s going to be a rollicking good time.

There are already enough RSVP’s to make it a capacity crowd, so if you don’t get there when the doors open at 5:00 PM there’s a chance you’ll be turned away. Normally, putting together an event of this size–20 awardees, almost 70 finalists, fancy invitations, several hundred drunks–takes an incredible amount of time, hard work, and attention to detail.

Unfortunately, those are my exact three weaknesses, so as in years past we’ve just made shit up and hoped for the best. This year will be no different, although with an executive committee of highly questionable abilities, it could potentially be even sillier than it was last year, when the high point occurred at 2:00 AM after everyone had been kicked out of the bar and survivors were staggering through downtown Manhattan Beach with a giant, 6-foot, inflatable pink penis.

Did I say this would be a classy event?

Still, as things come together in their sloppily drunken sort of half-crazed way, people have lurched into the breach to help make things happen. Whether it was Chris’s invitation assembly team, or Joe’s amazing t-shirt and poster design, people keep stepping up to help.

So it came as another happy surprise when Tony Manzella offered to print up a batch of the posters designed by Joe Yule, another example of people pitching in to make a fun community event even more so. Unfortunately, my lousy photos don’t do justice to the artwork or to Tony’s high-end production of the prints, but if you show up on Oct. 17 you’ll be able to see these beauties in person, and maybe even get one for yourself!

For $2.99 per month you can subscribe to this blog and learn more about the awesome people who live, ride, and contribute to the South Bay cycling community! Click here and select the “subscribe” link in the upper right-hand corner. Thank you!

You are currently reading Post it up at Cycling in the South Bay.