Cyclists love coffee and so do I.

A couple of months ago I started roasting my own beans, the primary motivation being cheapness, so I ordered a towsack of green coffee. There are only three or four pounds left from that original 15-lb. green coffee bean purchase from back in November. The total cost was about $4.15/lb, as compared to the going rate of about $14/lb for roasted coffee at Peet’s.

That’s not a typo. You’re paying the good folks at Peet’s about ten bucks to do something that at home takes about fifteen minutes.

Every couple of days I roast up a few beans in the cast iron skillet. It takes about minutes and then another few to shake out the husks. It’s a very un-pro operation. The beans roast unevenly, some of them burn, and when I shake out the husks off the balcony a few of the beans always tumble into the weeds below.

But you know what? I was back in Texas a few days ago at my Mom’s drinking her luxus coffee (whole bean as well as the little capsule stuff), and my worst coffee is infinitely better than her best. Mine is smooth and requires no milk or sugar. Hers is bitter. You know, it tastes like “coffee.”

And every cup of her Nespresso creates a little plastic package of waste that goes straight to the landfill. She’s a bumper sticker environmentalist, which means that although she wants to save the planet, when she needs her caffeine jolt the earth is just flat fucking gonna suffer.

What’s better than the coffee, though, is the little ritual of spending fifteen minutes every couple of days to prepare something fresh, from scratch. No machine, no fancy vacuum pack, just these little green beans gradually browning in an old iron skillet as I lazily stir them with a wooden spoon.

And the real payback is that the best moment in the day, when I drink my first and often only cup of coffee, comes from something I brewed deliciously to imperfection.

Now I know what you’re thinking: “Who the hell has time to fry up coffee every couple of days and shake out the husks and shit? What a pain in the ass.”

So this got me thinking because my Mom’s other coffee machine is a very fancy deal with a built-in grinder that you can time so that when you wake up the coffee is ready, freshly ground and freshly percolated. Like the Nespresso rig, the whole point is to push a button and get on about the important things in your life, like email and Facebook and cats.

The pleasure I’ve gotten out of my frying pan and burlap sack of beans is precisely the opposite of time saving and push button convenience.

Our lives are filled with time-saving devices, but have you ever considered what it is we’re saving the time for? For most of us, it’s not to put the finishing touches on our Nobel-prize winning chemistry experiment, it’s not to rebuild the burned-off faces of Syrian children war victims, and it’s not to feed and clothe the homeless on Skid Row. Rather, it’s saving time to do absolutely nothing worthwhile, which would include Facegag, football, everything on TV and anything at the movie theater.

But the single biggest reason we save time is so that we can work to pay for all of the time-saving devices that let us work more. Think about that for a second. It should make your head hurt.

And we work to pay for the huge homes and storage spaces in which we cram the time-saving devices. (Mom was renting three units at last count.) I’m not a minimalist, but I do live in a tiny place and I am cheap. I’m not anti-capitalist, but I don’t really want to spend any more of my time making money or spending it than is necessary. In other words, Target for me is not a destination.

Like commuting by bike, roasting a few green beans every couple of days can become an important ritual that fills your time with something that’s hands-on, cheap (did I mention it was cheap?), and that results in one hell of a good cup of coffee.

It might also be good, just a tiny little bit, for my curmudgeonly old soul. 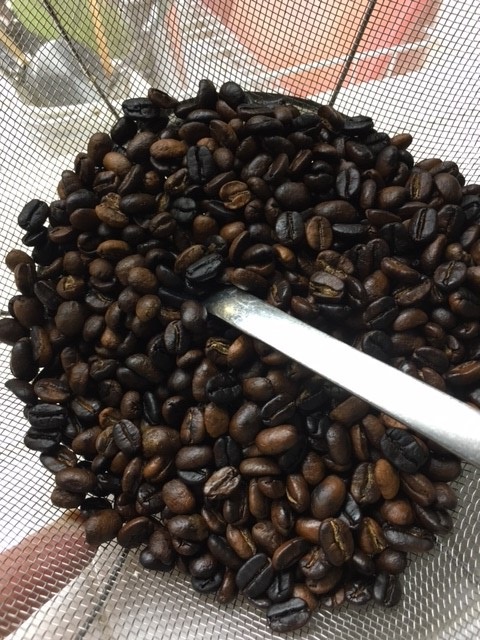 For $2.99 per month you can subscribe to this blog and you’ll be wearing homespun calico, making your own nails, and roasting your own coffee in no time. Click here and select the “subscribe” link in the upper right-hand corner. Thank you!

§ 35 Responses to Brewed to imperfection

You are currently reading Brewed to imperfection at Cycling in the South Bay.