Murder on the Boulevard Express

The 2016 Boulevard Road Race was very, very, very hard, but for me it was only very hard. It was a windy day and on the 55+ mph downhill with the twist that often sends the unwary hurtling off into the barbed wire fence on the far side of the road, we were only going about half that speed.

As we got near the turn to the Green Road of Vomitus and Death on La Posta, we passed a rustic meth house whose sofa-and-junker infested yard was filled with cop cars. A woman had been knifed to death an hour or so earlier and the meth house was the scene of a “guns drawn” Q&A session that included a helicopter.

We pedaled on because it was a bike race and we ain’t got time for that.

On the Green Road of Vomitus and Death there were attacks and various old fellows had their internal organs rearranged as we fought to the death not to get dropped at such an early point in the race even as most of us realized that we were going to get dropped eventually and that no one cares one way or another so several people just whimpered off the back, perhaps searching for the murder weapon so they could turn it on themselves.

We hit the climb on Highway 80 and reality ripped off her mask and revealed that there is nothing new under the sun, what happens every year to the old fellows at Boulevard will continue to happen, i.e. the fitter and faster and meaner and better riders rode away from the weaker and slower and kinder and worse ones, all of whom shared this thought in common: “What am I doing here?”

The answer was obvious to the handful of spectators: “You are losing.” 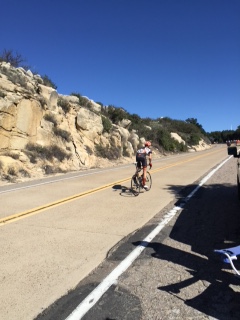 You’ll catch them! Not!

I watched the race leave without me in the feed zone, where Jan and Dean were calling my name but it wasn’t having the effect they hoped it would. They thought that by encouraging me my legs would magically absorb 1,000 watts of power and sprint up the road, catch the leaders and do heroic things, but instead their words only reminded me of the futility of life, the hopelessness of hope, and the meaningless of leaky prostate bicycle racing where the same old slow people get abused by the same old fast people week in and week out, like Groundhog Day with the Texas Chainsaw Massacre instead of an afternoon in Punxsutawney.

Anyway, the race was very, very, very hard for the old fellows who had to do three laps, but it was just very hard for me because I quit after one. Then I sat on the roadside in a comfy lawn chair and marveled at the similarity between old fellow racing and old fellow sex. Finish before the end; those who came to support you are disappointed and unsatisfied; lots of anticipation for not much excitement; and the vague boredom of trying to conjure 20-something fireworks out of a 50-something damp wool sock.

On the plus side, I hadn’t been stabbed to death.

On the way home, Attila the Hun, who had actually finished, and G3, who had also finished, did their best not to remind me that I had given up and quit.

“Quitting isn’t as bad as not starting,” said Attila.

“Right,” said G3. “When you quit it’s like giving up after having done your best.”

With many hours left to go, and lots of traffic on the 405, Attila asked us if we wanted to learn Hungarian.

So we practiced really hard for a couple of hours until we could describe the basic acts of reproduction and the utensils-extensions involved.

The next morning my son and I went fishing. I am the worst fisherman in the world and he is the second worst. “Hmmm,” he said after we got to the pier. “I don’t have any bait.”

We tossed the hook in to see if any fish would jump on it but they didn’t, so we engaged the Second Rule of Fishing: When You Can’t Catch a Fish, Screw with Your Pole and Tackle and Stuff.

Pretty soon we were both wearing a fishing line suit, having somehow managed to transfer all of the 10,000 yards of fishing line from the reel onto us. It is very hard to put all that line back on the reel once it has come off. Thankfully, I had brought my binoculars so I could birdwatch off the pier while my son tied himself into a running bowline with a double half-hitch.

Right below us were a trio of surf scoters, and the pier was chock full of western gulls, adults, juvenals, and young birds of various winter plumage. Off on the rocky jetty I even found a small mystery gull, gray-backed, white head, black legs, red bill. Out beyond the surf scoters was a buoy with a pair of fat harbor seals on it. A baby harbor seal kept trying to clamber aboard but he couldn’t get onto it. His mom watched patiently as he scrambled, fell, scrambled, fell, then gave up and swam away.

There was something so peaceful about being there in the early morning, watching my son wrap himself up like a fishing line mummy as the seals cavorted, the brown pelicans skimmed the surface of the gently rolling water, the scoters dove and popped up again like little brown corks, and the cormorants stood on the rocks holding their wings open to dry in the early morning sun.

My son eventually cut the Gordian fishing knot and packed his things, and we drove to a diner and had pancakes, eggs, sausage, and lots of hot coffee.

“Thanks for coming fishing with me, Dad,” he said. “Next Sunday lets ditch the fishing and go birding, okay?”

For $2.99 per month you can subscribe to this blog and learn how to ID a Heerman’s gull. Click here and select the “subscribe” link in the upper right-hand corner. Thank you!

§ 19 Responses to Murder on the Boulevard Express

You are currently reading Murder on the Boulevard Express at Cycling in the South Bay.