That’s what my legs are doing right now. Big, pulsing, outward-thrusting, deep-tissue pangs of low-level pain, low-low-low-grade having-your-thumb-slammed-in-the-door achiness, radiating from my thighs downward to the soles of my feet and making brief domestic violence trips to my calves, knees, ankles, soleuses (solei?), first/second/third/fourth plantar layers, then gobstopping boluses of pain back up to the buttocks, lower back, middle back, neck, and all the way back down again.

Ahhhhh … another serving of the Dogtown Pumpkin Spice Latte Ride, served up on ice with sugary sprinkles of broken glass, bits of rusty nail, and a frothy topping of blood-laced, freshly boot-heeled scrotum. If you bought it at a juice bar it would look like this: 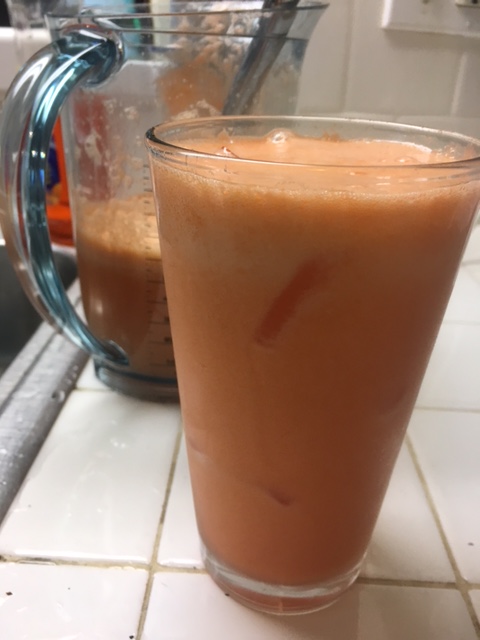 Where do I start, except of course the starting place of any heroic bicycling endeavor, that is, Strava? Strava tells me I was something of an amazing hero, with 49 whole trinkets.

The physical reality of the seasonal Dogtown Pumpkin Spice Latte Ride told me something else, and it went like this: YOU SUCK.

It sucked from the minute I crawled out of bed and got my miserable excuse for a worthless day started with a cup of coffee, a bowl of gruel, and Chapter 34 of Book 3 of the Practical Chinese Reader, Second Edition, where I read about General Zhang’s snuff box collection, to the final nail in my coffin. You want to talk about pain? That’s some painful shit right there.

Axel Buns was waiting for me at the coffee shop, unfortunately, which meant I couldn’t go back home to bed. Emmy G. showed up on her pimping Linus cruiser at 6:40 AM super pointy sharp, looking cute as a bed bunny, to tell me that she wouldn’t be riding across town and back to get massacred and then soaked in the torrential downpour scheduled for 1:00-ish.

“It’s not gonna rain,” I protested. “You’ll be fine. Look!” I pointed at the sunny sky.

She smiled and pointed at her cloudy smartphone, which was plastered in digital images of rain, hail, lightning, snow, sleet, and dragons.

Axel and I got to Dogtown Coffee half an hour early, confirming the hard truth that cycling in SoCal is really nothing more than an extended parade lap from one coffee house to the next. Awaiting us was Dan Chapman and his camera, where he memorialized the future corpses for identification by Dr. Foxworthy at the LA County Morgue post-ride. Below are some of Dan’s awesome photos, stolen with something similar to his permission, copyrighted and etcetera 2016. 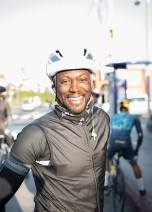 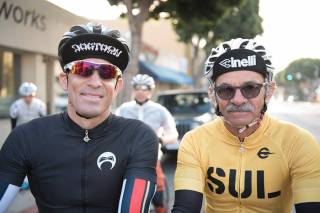 Axel and I swilled some coffee and he spoke slow enough for me to understand bits and pieces of his Cambridge English, and unfortunately all of it sounded like, “Well I say, Wanky old chap, this appears as if it will be a bit of a beating, crumpets and tea and such.”

“It’s really hard to understand that Cambridge English of yours,” I said.

“Whatever. It’s all English to me.”

The ride quickly swelled to about fifty complete idiots. Our fearless leader, Tony “Pumpkin Spice” Manzella, rolled up with the royal sceptre already drenched in blood, and lowered the ceremonial boom with a slashing movement that lopped off a couple of heads and instilled the fear of dog into those who remained.

“This,” Tony intoned, “is the seasonal Dogtown Pumpkin Spice Latte Ride. If you ever call it that I will kill you. And we only have one rule: No kooks.”

“Except Wanky,” he said.

The next hour was a blur of snot, tears, and sobbing as we attacked Climb Number 1. This obstacle goes straight up for a long time and finishes atop cumulonimbus. I began at the back, planning to husband my resources and then finish strong, but instead I drifted farther and farther back as everyone turned into tiny little specks far up the wall. Even Charon beat me. By a lot.

We descended at 55 mph and someone got one of those big downhill flats that sounds like a gunshot and you have to choose between looking over your shoulder to see who’s going head over heels on asphalt in a smear of bone, skin, cartilage and brains, or keep bombing the descent so you don’t get dropped. Easy call, sucker.

There was a brief breather and then we tackled the second obstacle, Climb Number 2. This was just like Climb Number 1 except it was more steep, more long, more awful, and more stained with the shattered delusions of all the people who thought that they were going to get to the top without tipping over. Having learned my lesson from the last time, I started at the back, husbanded my resources, and planned to finish strong.

In this case “strong” meant the very fastest of the last seven or eight cadavers. We looked kind of like this: 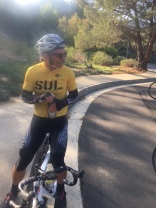 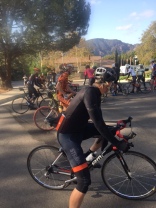 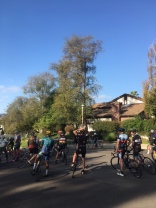 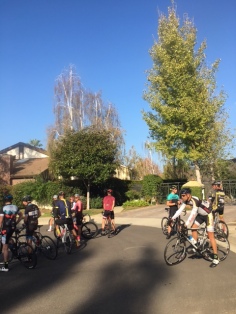 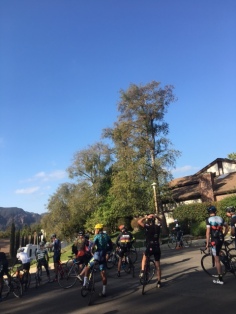 What followed was a kind of choreographed insanity: Dropping down Palisades Boulevard bar-to-bar with a churning mass of idiots who barely knew how to pedal their bikes, much less descend on them. What could possibly go right, especially with racing Ferraris blowing by in the left lane honking and flipping us off and throwing big chunks of rebar out of the jump seat and firing live rounds at us as if we were Dakota Access Pipeline protesters.

Fortunately, only five or six people died, and none of them was me, so I hunkered down on Pumpkin Spice’s wheel and waited for the PCH Massacre to begin. This is a short 5-mile jaunt along the coast in a roaring paceline.

“What is a paceline?” you are wondering.

A paceline is where Pumpkin Spice ramps it up to 35 going into a bitterly stiff headwind, and everyone else sits on his wheel and whimpers. Then Cutty, Holland, Charon, Chucky Cheese, Steve K., and one or two other suckers take turns at the front while the remaining 37.3 wankers sit at the back in a big glob of pain and, shirking work like a union employee on a cigarette break, cower and hide while the Titans of the Road Do the Real Work.

The next item on the agenda was the neutral section, where everyone casually rides up Pepperdine Hill then up Malibu Canyon Road then up the first part of Piuma.

“What?” you may be wondering “is even halffuckingway neutral about that stretch of road?”

The answer is of course that when Hamburger Hegeler dashed up Pepperdine and I followed him, acquiring all sorts of Strava trinkets as he manfully towed me around like a limp dishrag, me wondering all the while what a stiff dishrag was, when we finally got to Piuma and paused to polish our trinkets, the main group came roaring by at twice our speed and informed us that “that section didn’t count because it’s neutral.”

I observed numerous neutral strings of gooey snot and blood dangling from the ears and rectums of the passing riders and was glad that it was indeed neutral because had they really been trying someone certainly would have died.

What happened next is a terrible blur, and nothing ever really focused for long except the brief views I had of Wikstrom, Strava Jr., Pumpkin Spice, Head Down James, and various other actual cyclists sprinting away up 14-percent grades, not to be seen until the top of 7-Minute Canyon which, when done at my pace ended up being 15-Minute Canyon even with Oron Oronsky hauling me up and over like a stinky bag of fish garbage that he couldn’t get to the dumpster quick enough.

Pumpkin Spice had promised us that after shattering our spines he would treat us to free coffee at the top, and no one was smart enough to wonder how there could possibly be coffee at an armed guard shack miles from civilization on a rambling mountain road. Fortunately, there are apparently dozens of suckers born every minute, and all of them were on this ride, so after leaving our hearts and souls on the tarmac we stood around and chanted the “Masters Cyclist Lament”:

WHERE’S MY FREE SHIT THAT I DESERVE FOR EXISTING?

By now everyone was tired, so Holland, Cutty, and I sneaked away and got a head start on the final climb. Instead of starting at the back and finishing not-so-strong, this time I started at the front and finished not-so-strong, which meant passing lots of people on the uphill only to have them pass me again on the screaming, balls-in-your-teeth descent.

Back in Santa Monica, Rahsaan had invited everyone to the Raleigh bike shop on Main, where we would have free coffee and bagel, and everyone was quite famished and thirsty and hoping that THIS coffee would be a touch more substantial than the evanescent, theoretical, ethereal coffee that Pumpkin Spice had served atop 7-Minute Enervation Canyon. 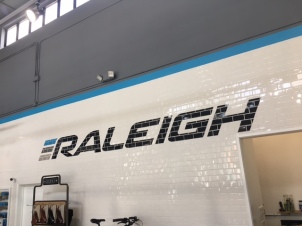 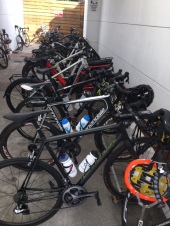 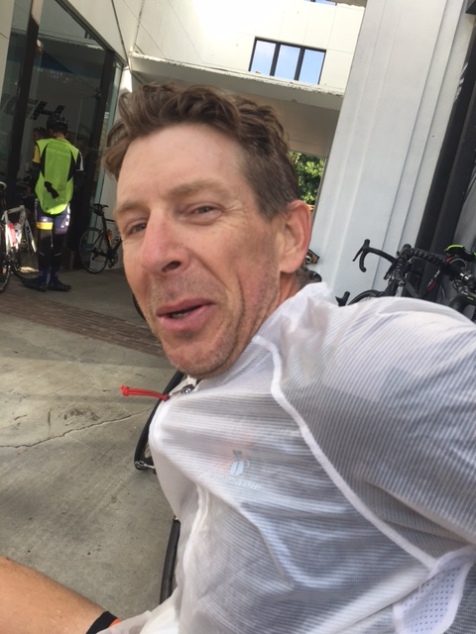 Axel Buns, Holland, and I had some coffee and bagel and headed home. By the time I got to the bottom of the climb in PV where Eric A. had on Thursday tossed my shit into the back of his pickup and driven me home, I was pondering whether or not to go by his house and beg another ride.

The sky was lowering and the perfect no-rain day had transformed into the beginning of an ugly squall. Should I be driven home in disgrace or race up the 2,000-foot hill and beat the rain?

I staggered across the threshold and flopped into the peanut butter jar, pulling out a fist and smearing the magic unguent across my face, lips, tongue, and eyelids.

Ummmm. Nirvana. Until next year.

You are currently reading Really terrible throbbing at Cycling in the South Bay.