It goes to eleven. Unfortunately.

Last year I did a grand fondue, Phil Gaimon’s Gran Cookie Dough, very big ride, one of the biggest, the best in fact. I rode really fast, faster than anyone else, bigly. Lots of people complained. Losers. Nasty, disgusting losers.

We got to talking about his grand fondue for 2017. Great fondue, absolutely the best. People say it’s the best. There were over a million people at the last one, I saw them myself. And the people who say that Levi’s grand fondue had more riders are liars, despicable nasty liars, some of the worst people on earth. I’m at war with those people now, I’ve won Phil’s grand fondue with the fastest time ever, much faster than Santa Monica BMW. Losers.

My people tell me that the people who did Levi’s grand fondue all cheated and didn’t even pay. I am paying for an investigation to have them banned from bicycles, really terrible people.

But Phil and I decided to talk some more about his grand fondue so we picked a place to meet, Philz. Coffee shop in Santa Monica. Hugely famous place, the best. I’ve been to a lot of coffee shops in Santa Monica, but Philz is the best. Others are terrible, lousy, bad service, surly waitresses and you can’t even grab them by the pussy. I can grab them by the pussy, they will let you do anything to them if you’re famous.

But parking in Santa Monica is terrible, the worst. Nasty, despicable parking and so many unemployed street people. They are disgusting, dirty former army people, they stink. So I put my bike in the back of the car in order to park and then ride my bike to meet Phil at Philz. Bicycling is hugely popular now, great, it’s the best, and I’m the best bike rider out there. Really, the best. My doctor says I’m the healthiest and strongest bike rider he has ever seen. I have huge watts, too. Massive watts. Much bigger than Phil’s watts. Phil is a nice person, but tiny watts. Just look at my hands. Tiny Watts Gaimon.

I parked the car and took out my bike to ride it to meet Phil at Philz, very popular place, the most popular place in California, great coffee, the best, but my SRAM battery had been removed from charging and I was stuck in the eleven. SRAM is a terrible product, made in China, very bad people, terrorists. Without the battery which no one had told me to put back in I had to put the chain on the 59, a huge gear.

Some people have said to me, “You can’t ride such huge gears,” but that is a lie. Despicable news media. I can push the biggest gears and that’s not nearly as big as the ones I will push later on next year’s grand fondue, Phil’s Gran Cookie Dough Fondo.

When I met Phil at Philz, which by the way is a fantastic coffee shop, the best, he asked me about my huge gears, obviously they were huge, much bigger than his, giant gears, round ones, the best. But we need to keep out SRAM Chinese products if they don’t allow our electronic shifters to be sold in China, 35% tax and we will build a wall and Xi Jin Ping will pay for it. Out of his allowance. A huge wall, in fact, Americans are tired of buying Chinese electronic derailleurs. They are rapists and criminals.

Phil was surprised at how huge my gears were and he said so. “Huge gears, massive,” he was impressed and people say that those were the biggest gears since David Perez, bigger than his by far. 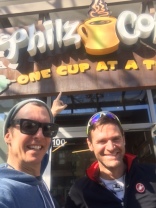 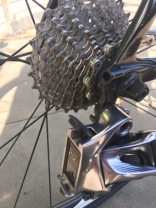 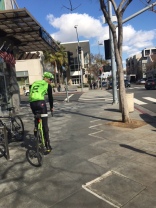 § 34 Responses to It goes to eleven. Unfortunately.

You are currently reading It goes to eleven. Unfortunately. at Cycling in the South Bay.