I have been feeling kind of sorry for my ol’ buddy ol’ pal G$ lately. He has gotten super old. I think he’s at least 56 or a 100. I can tell because he doesn’t go that good on the climbs anymore. G$ used to be the fastest climber anywhere, but I have ridden with him a few times lately and he is over the hill.

It’s a sad thing to see, a good buddy who’s a darn good ath-a-lete, one day going gangbusters and the next day all creaky-kneed and slow and hobbling around on a walker drinking pumpkin spice latte. I felt extra sorry for my good ol’ buddy ol’ pal because today was the second leg in the Big Orange a/k/a Team Lizard Collectors First Ever Annual Forevermore Galactic Championships, an amazing competition modeled after a bad haircut that includes a 1k TT, a hillclimb up Latigo Canyon in Malibu, and ten laps around Telo.

Today was the Latigo stage and like I said, it was bittersweet to see ol’ G$ show up, a shadow of his former self but still high-fiving and backslapping and being full of good cheer, like an old dog licking its master’s hand right before you take it out and shoot it. Latigo Canyon is a 40-minute climb if you are really fast, and ol’ G$, my good ol’ buddy ol’ pal, still has top 6 on one of the segments; the overall is owned by “Cookies” Gaimon, who stole it away from Doper McDopeface Levi Leipheimer.

It was a mass start and the thirty or so starters were nervous as they should have been because I had some fiery good legs and was not going to be taking any prisoners. My plan was to start slowly and then gradually ramp it up until the searing pain inflicted by my tremendous power whittled the group down to five or six, including G$, my ol’ buddy ol’ pal. I didn’t want to drop him too quickly because if there’s one thing you learn over a lifetime of bike racing, it’s to show respect to your friends even when they are kind of broke down like one of Lee Iacocca’s K-Cars.

I had told Mrs. WM, who was traveling in the lead car to photo-document my impending victory, that I would be shattering the group at the ten-minute mark, so be ready.

The gun went off and Eric Bruins raced off the line like someone had stuck a string of lit Black Cats in his shorts. It was much faster than my plan stipulated, but I hopped on his wheel and waited. He is young and not too smart, so as soon as he blew up I would take over the pacemaking until the searing pain inflicted by my tremendous power whittled the group down to five or six, including G$, my ol’ buddy ol’ pal.

After a few minutes Eric got really tired, exhausted and on the verge of collapse, actually, but he is one of those guys who likes to try and fake you out with fake toughness so he didn’t slow down at all. Then at about the time I was ready to gradually ramp it up until the searing pain inflicted by my tremendous power whittled the group down to five or six, including G$, my ol’ buddy ol’ pal, my ol’ buddy ol’ pal G$ executed a silly, pointless, hopeless, very amateur, desperation attack.

It was everything he had (which wasn’t much), he went all out, which was kind of sad but I also respected it at the same time. He was going to splat but at least he would do it with panache. Eric hustled onto his wheel, still pretending not to be tired, and I hustled onto Eric’s wheel breathing kind of hard not because I was in the box but because I wanted them to know I wasn’t fooled. Behind me were four other riders, which meant seven, total.

I laughed to myself, because my plan had been to whittle it down to five or six, not six or seven, and we had one wanker too many. About this time poor old brokedown, creaky-kneed, a-little-bit-confused ol’ G$ did another fake attack, this one about as hopeless as the first one. I could see people get worried, but I didn’t get worried at all. I just figured I would let them all go and catch up to them later because I wasn’t quite ready to ramp up my tremendous power yet. Plus, it would make my ol’ buddy ol’ pal G$ feel good to have a little bit of a glory pull by himself with all those 20-and-30-year olds glued to his wheel with their faces all twisted and looking like they were giving a rectal childbirth.

About the time they all disappeared, if only for a moment, Mrs. WM came by with her camera. “Are you winning?” she asked and of course I nodded.

After what seemed like a few hours, along came Hiroyuki, Penta, and Maxson. They were going at a good clip because Hiroyuki was doing all the work while Penta and Maxson skulked at the back. I figured I would help them skulk so I jumped on. I would catch my breath before powering up to my ol’ buddy ol’ pal G$ and attacking him with my tremendous power.

For some reason, Hiroyuki decided not to slow down which made it very hard for me to gather my tremendous power. Penta and Maxson kept trying to skulk onto my wheel but I started playing possum, breathing like a dying man, wobbling, asking for my mother, and refusing to move so much as an inch towards that nasty and awful place filled with bad memories known as “the front.”

Penta and Maxson were not too pleased so they attacked me on the downhill, giving Hiroyuki a few moments’ rest and scaring the bejeezus out me. Hiroyuki then went back to the front and continued to stymie my tremendous power as I, Penta, and Maxson rolled over each others’ tongues, livers, and breakfast. Fortunately, about a quarter mile from the end I began to feel lively and fresh at just about the time that ol’ Penta and Maxson and Hiroyuki, tired from doing all the work, began to do the Bike Racer Arithmetic of “How do I not get last out of the grupetto?”

I jumped hard, throwing down a tremendous 200 watts or maybe 205 and sprunted past them, when up ahead of me, Ivan the Terrible, who had been dropped from the leaders way back in September, looked back and saw me coming on. No matter how tired he was, the thought of being pipped by cranky Gramps in the last hundred yards put the fear of dog into him and he took off like someone had put the other string of lit Black Cats in his shorts.

I almost caught him and would have if the road had been longer, which is Biker Speak for “he beat me,” and when I crossed the line, there he was, my ol’ buddy ol’ pal G$, having dropped everyone on the way to the top and completed the 40-minute climb in 37 minutes. 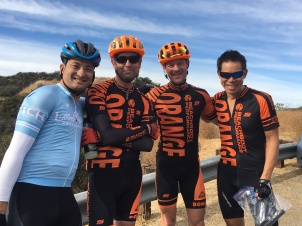 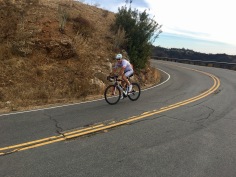 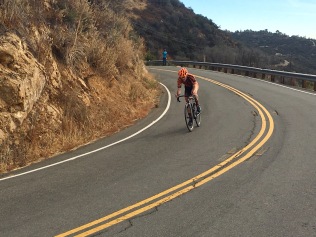 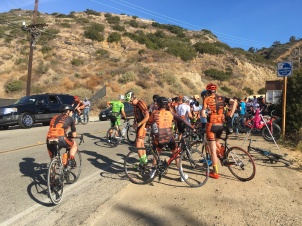 You are currently reading Playin’ possum at Cycling in the South Bay.