The day the earth stood still-ish

It takes a lot to shock me when it comes to bicycling, but yesterday, pedaling home from a cup of coffee near the Center of the Known Universe, I got a shock. A big ‘un.

I was on Esplanade in Redondo Beach, about to start the ascent into Palos Verdes, when I saw a familiar bare back a couple of hundred yards ahead. Blonde hair, check. Jeans shorts, check. Work boots, check. Shirtlessness, check.

It could only be Shirtless Keith. And it was … I thought.

As I approached, though, the picture didn’t add up. Sure, that was Keith on a bike. But it wasn’t the bike, not by a long shot. Instead of his legendary Raleigh hybrid, 55-tooth single chain ring with a Pop-Tart strapped to the rear rack, Keith was riding a NEW BIKE.

And not just any new bike. This was a spit-polished, all chrome GT BMX single speed. I did a double take, then a triple, then a quadruple. “Hey, Keith,” I said. “What’s up with the new bike?”

“Aw,” he said, “my old one broke. Cracked the frame just before Christmas, and then the crank sheared off. She was just done.”

“How many miles did you have on that thing?”

“That’s about 100 feet elevation per mile, so you’re at nearly 2 million feet.”

“How many years you been riding that Raleigh?”

“Well, a real nice old lady gave it to me ten years ago, and it had a big wicker basket on the front, and I rode it a bunch, you know everything broke on that bike, but I could always fix it.”

“20,000 miles and 2 million feet of climbing a year for ten years works out to about 200,00 miles and 20 million feet. And I’ve seen you ride. You don’t go easy. I’m not sure that bike was designed to handle that kind of riding.”

“It was time for a change with that cracked frame.”

“I like it. It’s got a beefy rear hub, real solid. Bike weighs 34 pounds, which is nice; the Raleigh was about 36, so I’m actually saving some weight.”

“What about the single speed?”

“How’d you get into riding, anyway?”

“Like I said, lady gave me that Raleigh and I just started riding it, couple laps around the hill, one lap is about 22 miles, and then I lost a bunch of weight and was having cardio problems and some other issues but they all cleared up.”

“How much did you weigh when you started?”

“About 170. That’s a good weight. Anything less and I start eating too much.”

By now we were going up Silver Spur, a really steep climb followed by Basswood-Shorewood, which are even steeper. Keith cruised up the hills, chatting and not even breaking a sweat.

“People are gonna be surprised seeing you on that new bike.”

We parted company, me to go home and rest, Keith to knock out the remainder of his 65-mile ride. I still couldn’t get over the sight of Shirtless Keith on anything other than the Raleigh + Pop-Tart. There was hardly a rider on the Hill who hadn’t been dropped by Keith and his legendary rig. The new bicycle sparkled as he rode away with a wave. 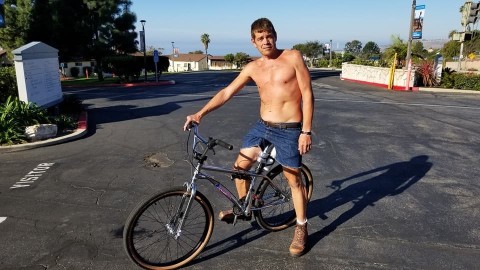 § 4 Responses to The day the earth stood still-ish

You are currently reading The day the earth stood still-ish at Cycling in the South Bay.