Six years ago I watched my last movie, “Skyfall.” My wife had coaxed and cajoled me into going even though she knew I haven’t been able to stand cinema for a long time. The plot was the only one that Hollywood knows: Money spends money and goes after money whose money gets money’s money. The sequel is that you spend more money to watch money chase money all over again.

Skyfall gifted me with a splitting headache. Modern movies’ use of digital technology means that they can do shots that only last a second or two. In a 143-minute movie that breaks down to about 4,290 different shots, and leaving aside the fact that it’s horrible storytelling, the constantly flickering images accompanied by bright colors and loud noises ruined my head for several hours afterward.

As we exited I turned to her and said, “That’s it.”

“That’s the last movie I’m ever going to watch.”

I didn’t answer, I just stopped going to movies.

As I wrote here a few weeks ago, my bicycle peregrinations from PV to Santa Monica at a leisurely, non-race pace, resulted in a friendship with Ralf, a German dude who introduced me to Villa Aurora, leading to a fascinating evening during which I got to listen to accomplished screen star and director Maria Schrader talk about how she made her movie Vor der Morgenröte. It didn’t hurt that this biopic was about Stefan Zweig, one of my favorite Austrian writers, reprising his time of exile from WWII Germany until his 1942 suicide in Brazil.

The brief clip we saw reminded me of my childhood in Houston, when my dad would take me to the art cinema house in Montrose, and I’d feast on real celluloid stories like Mr. Klein and Bread and Chocolate. I left feeling a little different about movies, a little less convinced that I’d never see another one.

This was a good thing because a couple of weeks later I got an invitation from Villa Aurora to watch a screening of a movie called The People v. Fritz Bauer. The story is about how Fritz Bauer, the German Hessian state prosecutor, helped Mossad track down and kidnap Adolf Eichmann. But like any great tale, it has layers, villains, heroes, surprising sex, and pedestrian characters all leading up to a great climax.

Unlike Skyfall, its predecessors or its progeny, The People v. Fritz Bauer is loaded with ambiguity, complexity, and at least fifty-one shades of gray. Unlike James Bond the actors are cast for their ability to act rather than for their conformity to an absurd standard of plastic surgery-enhanced physical characteristics. And most unlike Hollywood’s broken records, rather than relying on guns and punch-em-ups and CG magic, The People v. Fritz Bauer creates drama through dialogue, human interactions, beautiful period sets, and a bedrock of recent history that it is presumed the viewer knows about and at least peripherally understands. It doesn’t hurt that the lead actor is a powerhouse of dramatic portrayal.

In short, like a great book, this movie grips the mind and the emotions and forces them to engage.

We were unable to stay and listen to the brief Q&A put on by Villa Aurora, where the star of the movie, Burghart Klaußner, spoke to the packed room about the movie. But a chance conversation about bread led to the most wonderful thing … an impromptu invitation to a party the following evening.

We came the next night bearing three loaves of bread: A sourdough, a landbrot, and a simple white loaf, and were rewarded with several hours of conversation with Maria Schrader, Klaußner, and a cast of other fascinating people, including the new director of the Thomas Mann House. People were so well read, so versed in current affairs, and their work was so connected with ideas, books, and humanity that it took my breath away.

And of course it gave me a chance to showcase my breathtaking ignorance about film, when in response to a question I said “I can’t stand the way the shots change every two seconds. It gives me a headache.”

“Not every movie does that, you know,” Maria said. “Vor der Morgenröte, for example. It starts with a long opening shot.”

“How long?” I asked, skeptically.

She paused and looked at me, the corners of her mouth upturned just a little. “Ten minutes.”

I thought about that for a second, stunned, and it occurred to me that abandoning cinema because of Skyfall made as much sense as abandoning my bicycle because of Lance Armstrong.

“Surely it’s a bit narrow-minded of you to reject all films because of one genre?” she gently asked.

One of Maria’s movies, Aimee & Jaguar, is showing on July 9 at Ahrya Fine Arts. 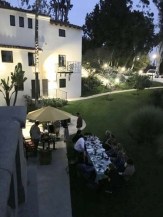 You are currently reading Bond. Not James Bond, please. at Cycling in the South Bay.